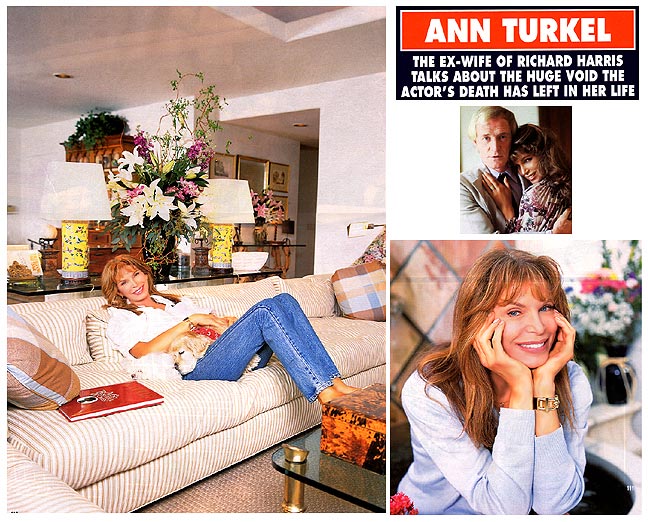 Ann was married to Richard Harris in the 70’s and early 80’s (top right) and remained close after their divorce.
Today, the actress and former cover girl lives in Beverly Hills with her dogs Samantha and Olivia (above left).

They were married for only eight years and had been divorced for 20, but Ann Turkel is still struggling to come to terms with the loss of her ex-husband, Richard Harris. “He was my husband, my teacher, my mentor and best friend – he was everything in my life,” says Ann of the inimitable actor who died last October at the age of 72.

Actress and former cover girl Ann. 46, met Harris when she was just a teenager and went on to become his second – and last – wife. Talking to Hello from her Beverly Hills home, she reveals that for most of her adult life she had a passionate, rollercoaster relationship with one of the finest actors of his generation, whose reputation as a hellraiser was legendary. But despite his wild drinking bouts and explosive fits of temper, Ann remained in love with a man who could be as tender and vulnerable as he was irascible.

At the end of July last year. Richard had just finished filming Harry Potter and the Chamber of Secrets, in which he played Professor Albus Dumbledore, when he fell ill and was taken to hospital. He was diagnosed with the lymphatic cancer Hodgkin’s disease and rapidly deteriorated.

It was October when Ann received a call from Richard’s son Jared, by his first marriage, telling her to fly to London immediately. “On the flight over I didn’t think he was going to die,” she recalls. “I was willing him to survive. I felt that by being there, there might be some glimmer of hope.” That glimmer flickered out as soon as she arrived at University College Hospital and saw Richard attached to a life-support machine. ‘1 held his hand. spoke into his ear and told him I loved him. I kept saving. ‘I’m here, Annie’s here, I wont leave. You’re not going to go – you’ve got too much left to do.’ I was hoping beyond hope.’ But just 20 minutes later, the life-support machine was switched off. Ann was standing on Richard’s right side. while his first wife Elizabeth and her sons – Damian, 44, Jared. 41, and Jamie, 39 – as well as his two nieces and best friend, were standing on his left. “When they switched the machine off, it was like a metal door going down. I just felt dead,” Ann admits. The fact that she had only 20 minutes with him haunts her still. “I’ve had no closure with this, which has caused me great pain.”

She found his funeral ten days later just as traumatic. The mass held in London was “beautiful”, but she broke down at the crematorium. “The cremation was something else. To watch this vibrant, extraordinary man being on a conveyor belt… Ijust totally lost it and sobbed uncontrollably,” she says.

Richard, of course, was a famous raconteur who could entertain an audience for hours with his stories. While films such as This Sporting Life. Camelot and A Man Called Horse established him as one of cinema’s most charismatic stars, his drinking, braw- ling and rabble-rousing off-screen also confirmed his status as one of the wildest characters in showbusiness.

Ann knew none of this when she first met him in 1973. A successful model for the magazines Vogue and Bazaar, she had secured her first acting part starring opposite Richard, who was 25 years her senior, in the black comedy 99 And 44/100% Dead. They fell for each other immediately and enjoyed an old-fashioned courtship for months, during which they’d exchange nothing more than kisses. Richard proved a hopeless romantic.

“He’d leave little notes for me. I’d be leaving my hotel and the receptionist would hand me a note from him saving, ‘Hurn up.’ I’d get to the set and in my trailer there’d be a Ginger Ale bottle with a white rose in it and a note saving, ‘What kept you so long?’ she laughs. 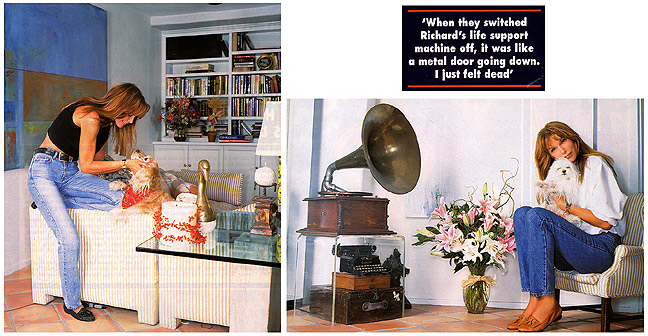 “Richard spoiled me to distraction, even after our divorce,” says Ann. A year-and-a-half ago, he gave her a
Van Cleef and Arpels watch which she wears everyday as “it’s like having a part of me with him”.
She adds: “I bought and built this house myself, after having taken no money from Richard in the divorce.”

“I never noticed the age difference because Richard was like a child. Before I met him, I’d said to myself, ‘I’m never going to marry anyone too old, anybody who has children, anybody who’s been married before or an actor and I got all four in one person!” They finally consummated their relationship once filming had finished in October and, the next morning, Richard asked her to marry him, writing a letter to her parents requesting her hand in marriage. She agreed and their wedding took place in June 1974.

Over the next eight years, however, Ann’s life became dominated by Richard’s unpredictable mood swings and drinking bouts. “The stories I have to tell would make every other Hollywood exposé look like a Disney movie,” she says darkly.

Blissfully naive at first, she soon discovered Richard’s propensity for alcohol when she organised a surprise birthday party for him. “He got very drunk. He didn’t even know who I was.He then broke a mirror and slashed his wrist so his driver and bodyguard took him to hospital. I was terrified. The next day he came to me and said, ‘This only happens once a year, to release pent up energy’ and I believed him! I had no idea what I was in store for.”

With a reputation as a womanizer he once boasted he had “the women of the world” after him – it’s perhaps surprising that Richard was faithful to Ann throughout their marriage. But she insists that, despite numerous approaches, he never strayed. “He could charm anybody,” she admits. “He had a great gift – when he wanted to use it of making anybody feel phenomenal. “But I was very secure with Richard and he was very honest with me. He’d always tell me when one of his leading ladies would come onto him.” Although she says she never felt insecure with him, there were times particularly when he was drunk – that Richard would he insecure with her. “He’d come up with things in his head, imagine I’d been with somebody. He’d get paranoid and go into rages.”

Although there were “huge passages of time” when Richard stayed off alcohol, they were too few and far between. “Richard didn’t drink if we were alone together,” Ann says. “But the minute anybody else was with us, he would start drinking into obliteration – a true symptom of an alcoholic.”

Divorce, at first, wasn’t an option. “I thought. ‘For better or for worse, in sickness and in health…’ and I believed all that. I stuck with him, but it was terrifying. When other people were going out to parties and restaurants, I stayed at home for years because I didn’t want us to run into a situation where he’d start drinking again.

“Then he got into cocaine instead of drinking. When coke didn’t give him the same rush – he became immune to it – he would take both coke and drink, which made him like Dr Jekyll and Mr Hyde.”

Life became an exhausting round of picking up the pieces after him, she says – flying to a film set in Montreal where he’d walked off because he didn’t like the script; breaking up a fight in the Bahamas where the’ had a house. On one occasion she even thought he’d died when he collapsed in Malibu after a 48-hour drinking binge.

“He’d passed out on the floor, white as a sheet. I called the paramedics and he was taken to hospital. He pulled through and said he was never going to drink again. Yeah, right,” she laughs bitterly. “But that was one of the scariest times because I thought he was dead.”

Ann began ‘walking on egg shells”. “If he’d drunk a lot the night before, the next morning if I said the ‘wrong thing he could explode. It got to the point where I couldn’t even talk normal l’ am’ more. I lived in fear.”

During these episodes, she says she was physically abused b’ him “beyond anything you can possibly imagine”, but refuses to give details, saying, “I’m saving all this for the book.”

His drinking and erratic mood swings were also, she claims, why she chose not to have children with him. “I felt, ‘How am I going to handle a baby and handle Richard?'” she says. “I knew that if I ever gave him a daughter which was what he wanted], he would own my life entirely. He would be able to tell me where to go, what to do, who to see.”

Ann reveals that Richard often visited her Los Angeles home. Now, she’s working on a book of their life together.

Eventually, as they spent less and less time together over the years, she decided to leave. “My health couldn’t take it any more. I should have left him the first year,” she admits. “My mother has asked me why I didn’t, and I have no idea. He would turn around and charm me right back in again.”

The bad times had always been balanced by the good and he could be as loving as he could be angry. Prone to extravagant, generous gestures, Richard flew their families over from the U.S. and Ireland to London one wedding anniversary and threw a surprise party for Ann. He would often tell her that “there was an invisible umbilical cord that connected us”.

But although their marriage eventually broke down, their bond remained. In 1982 they reluctantly divorced, but their relationship continued like a marriage. Even after the divorce, admits Ann: “When we were together it was like we were married. We were either together in New York, Los Angeles, London or the Bahamas, or we were on the phone every day.”

So strong was their bond that although she’s had two long-term relationships since, she has never met anyone to match him. “I was never able to marry again after that. I couldn’t. I’d imagine the look on Richard’s face and how it would kill him,” she says.

Since he dominated so much of her life, she’s now trying to claim some of it back. “In a sense, now he’s gone, I can hopefully get on with my life,” she says.

Her modelling career is enjoying a renaissance .. she was featured in a 16 page Stephen Meisel fashion spread in Italian Vogue last summer and movie offers are coming in. Although currently single, if someone did come along, at least she wouldn’t have to tell them “Richard comes first”, as she did with her two boyfriends.

For the moment, however, she is still grieving his death. “Whenever anything happens on the news, or an old movie comes on, I can’t just pick up the phone and say, ‘Guess what?’ and talk about it. I miss having him to talk to. It’s this huge void in my life – Richard was my life.”